Picking the winners and losers of week 10 in the NFL. 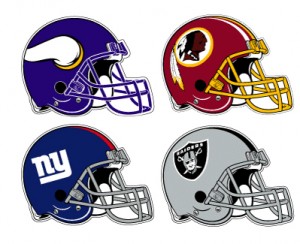 What a week in the NFL! Key injuries for the Packers, a WORLD of drama and outrage in Miami, a suddenly intriguing match-up with a reborn, Foles-led Eagles team visiting a wounded Packers team at Lambeau Field. More close battles will take place this week than you can shake a stick at.

Washington Redskins at Minnesota Vikings (-1.5)
The Washigton Redskins turned in an impressive performance last week in downing the Chargers. As well, the Vikings played very strong against Dallas, but can they shut down the Redskins? Give me the home team in a close one.
Vikings 23, Redskins 20

Seattle Seahawks at Atlanta Falcons (PK)
Atlanta appears rudderless. A swath of injuries have hobbled a once powerful team. I’ll take the Seahawks because they are the better team (top-to-bottom), the better defense, and they have a better coach.
Seahawks 24, Falcons 14

Detroit Lions at Chicago Bears (-3)
Another vicious matchup with the Division lead at stake! Although the Lions have grown (I love Stafford’s heads-up QB sneak against Dallas), Chicago is rolling under Trestman, feeling good after winning in GB for the first time since 2007. Bear down Chicago Bears.
Bears 30, Lions 28

Philadelphia Eagles at Green Bay Packers (-7, -105)
Red Alert: Aaron Rodgers is out. Seneca Wallace wasn’t getting the job done versus Chicago last week. In comes the suddenly-hot hand of Nick Foles and the much-maligned Chip Kelly Experience. It pains me to say it, but . . .
Eagles 34, Packers 27

Jacksonville Jaguars at Tennessee Titans (-3.5)
The Titans are too tough-minded to lose at home. I don’t see them letting the Jaguars off the mat. Mr. Clowney, welcome to Jacksonville!
Titans 21, Jaguars 7

St. Louis Rams at Indianapolis Colts (-2.5)
The Colts absolutely stole one in Houston last week. If Kubiak didn’t have a mini-stroke then the Colts comeback never happens. That said, the Colts should hold serve well versus the Rams.
Colts 35, Rams 28

Oakland Raiders at New York Giants (-9)
Giants QB Eli Manning is due to flex his mid-season form. The Raiders and Pryor aren’t strong enough yet to travel back East and take one away from the G-Men.
Giants 42, Raiders 24

Buffalo Bills at Pittsburgh Steelers (-7)
There is no way that a Bills rookie QB is going to come in and have success against the Pittsburgh defense. Dick LeBeau is considered to be one of the greatest defensive coordinators of all time and he eats rookie QBs for breakfast.
Steelers 28, Bills 13

Cincinnati Bengals at Baltimore Ravens (-3)
“Nevermore”. This is the week that the ‘Bad Good Team’ (Ravens) puts down the ‘Good Bad Team’ (Bengals). A defending Super Bowl Champion has certain duties . . . one of them is winning at home against the Bengals.
Ravens 31, Bengals 24

Carolina Panthers at San Francisco 49ers (-6)
Biggest match-up here: Cam versus the 49ers D. I know Newton is improving and the Panthers are on a roll, but the S.F. Harbaughs will be well-schemed for the Panthers phenom. It doesn’t hurt that the 49ers are returning some of their receiving assets (Davis, Manningham) and Kaep has his mojo workin’ again.
49ers 34, Panthers 26

Denver Broncos (-3) at San Diego Chargers
P. Manning has spent more time in the hot tub this last two weeks than P. Diddy. With fresh ankles and rest, look for the Broncos to show the World that they will be just fine with Jack Del Rio holding the reins until John Fox returns.
Broncos 48, Chargers 38

Houston Texans (-3) at Arizona Cardinals
Keenum is the real deal. If Kubiak is back and calling the plays then I expect Houston will take this one on the road. Heck, I expect it if Case Keenum is calling his own plays.
Texans 30, Cardinals 20

Dallas Cowboys at New Orleans Saints (-4)
Rob Ryan readies for Romo. The Saints look to bounce back from an embarassing loss to the Jets. I’m sure Dallas will throw the kitchen sink at the Saints, but the Saints at home in the dome will win the shootout.
Saints 49, Cowboys 47

Miami Dolphins at Tampa Bay Buccaneers (-1.5)
I don’t remember a poorest slate of MNF games for an entire season. Pitiful. How can Miami be expected to win this week without the left side of their offensive line? Perhaps they should have been running a tighter ship and not have allowed a buffoon to jeopardize the success of the team. Sure, I understand initiations into groups (remember the Friar Tebow haircut?), and that is part of things in a traditional sort of way . . . but if you’re going to stock your team with individuals that make bad decisions – then you had better be policing them something fierce.
Buccaneers 42, Dolphins 0