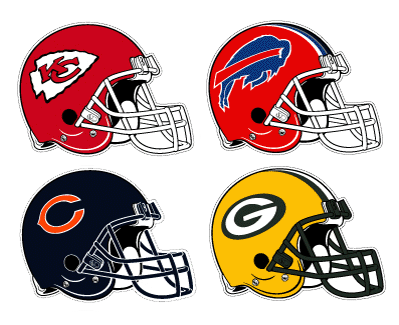 Picking the winners and losers of week 8 in the NFL.

Ah, week 8 in the NFL. Teams are finding their identity and establishing their playoff credentials. Let’s take a look:

Dallas Cowboys at Detroit Lions (-1)
“Getcha Popcorn” for Megatron and Dez Bryant: The Showdown. This game has the makings of a potential classic. Dallas is on a roll and the Lions are desperate and dangerous. Nobody puts baby in a corner. Give me the Lions in a nail-biter.
Lions 31,  Cowboys 30

Miami Dolphins at New England Patriots (-7)
Miami is a year or three away. Even though the Patriots are a shadow of their former selves, I don’t see the Tom Brady losing this one on Foxborough.
Patriots 31, Dolphins 17

Buffalo Bills at New Orleans Saints (-6.5)
I like how Buffalo has been playing lately, but it is too much to ask of them to go into New Orleans and get a ‘W’. Too much Brees, too much Payton . . . and possibly too much fun on Bourbon Street the night before the game for the visiting Bills players.
Saints 30, Bills 21

San Francisco 49ers (-10.5) at Jacksonville Jaguars [London, England]
One of these weeks the Jaguars are going to rise up and win a game. I don’t think that this is the week.
49s 28, Jaguars 9

New York Giants at Philadelphia Eagles (PK)
“Dear Magic 8 Ball: Is this the game where the fraying around Chip Kelly’s security blanket takes a severe uptick? Could Eli Manning and the Giants be really, really tired of losing?” Giants 34, Eagles 13

Pittsburgh Steelers (-4.5) at Oakland Raiders
Yes, the Steelers beat the Ravens last week and look much better. But that was last week. Welcome to Oakland, CA. Welcome to the Black Hole. Worse? The whipping boy of the AFC West is going to take you to the woodshed. Dig ya’ll lock your doors?
Raiders 24, Steelers 17

New York Jets at Cincinnati Bengals (-4.5)
Cincinnati’s defense is way too good to let them lose this game in front of the home crowd, right? I mean, Andy Dalton can just throw the ball to AJ Green for an 80 yard touchdown every time, right? This Jets team isn’t that scrappy, is it??!!??
Jets 27, Bengals 21

Washington Redskins at Denver Broncos (-6)
Every time my neck hurts, I think of how Peyton Manning’s neck must hurt – especially after 4 surgeries and a few vicious hits by Robert Mathis last week. Ankle my foot. Every time my knee hurts, I think about how much better RGIII’s knee must feel than mine does. Also, I remember being 37 recently. More vivid are my days as an invincible 23-year-old.
Redskins 34, Broncos 31

Atlanta Falcons (-4) at Arizona Cardinals
I look for the Falcons to further implode – while, simultaneous – the Cardinals do a wicked impression of a playoff team. Midnight in the desert. For the Falcons.
Cardinals 31, Falcons 20

Green Bay Packers (-1) at Minnesota Vikings
Any Given Sunday. I see pride coming into play here for Jared Allen, Adrian Peterson and the company. Look for a very tough, grind-it-out, punch-em-in-the-mouth game from the Vikings in front of a raucous home crowd.
Vikings 24, Packers 23

Seattle Seahawks (-4) at St. Louis Rams
With a huge disparity in QB play and a margin of talent difference both being in favor of the Seahawks, I’m bailing on the Rams at home. It really is too bad Favre is too old. They actually should have called Tim Tebow. Say what you want, but the guy gets wins.
Seahawks 20, Rams 6