Have you signed up for Google Fiber yet or pre-registered? It is a very exciting time to live in the Greater Kansas City Metropolitan area – as the Silicon Prairie is being established.

Unless you live or work in one of the areas that is noticeable NOT ON BOARD YET. I’m talking to you: Overland Park, Lenexa, Leawood, Independence and Prairie Village. As shown in the map below (thank you, Jenna), nearly EVERY CITY in the metro area has figured out how to get on board with one of the most exciting things to ever happen to the Greater Kansas City Metro area. 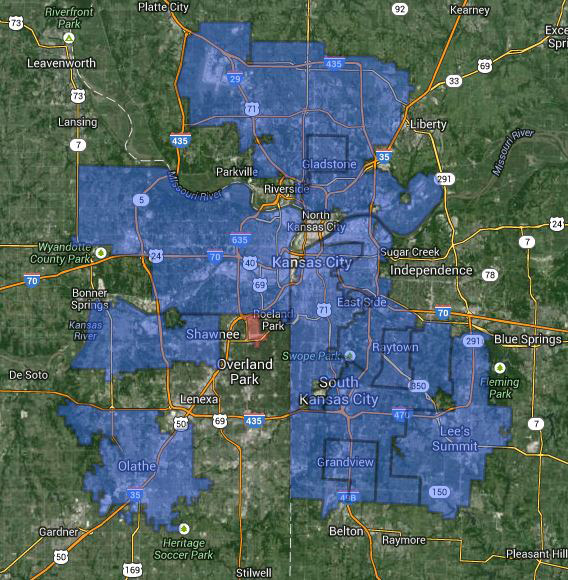 Next Saturday will mark the one year anniversary of an additional city in the metro area making an announcement that their community had reached an agreement with Google Fiber. Since then, over a dozen communities have joined in to expand the Silicon Prairie.

But not Overland Park, or Leawood, or Prairie Village, or Independence, or Lenexa.

This morning I spoke with Sean Reilly, the Public Information Officer at the City of Overland Park and he was able to share an approved status update of the situation: “The city has expressed its interest in Google offering its services to the residents and businesses of Overland Park, KS, and the city is continuing to pursue those services with enthusiasm.”.

Reilly also was able to share that if a new company were to be in the process of bringing services to the city of Overland Park – that there are protocols and non-disclosures that would be in place and therefore limiting and/or preventing release of any informational updates per said agreements.

My takeaway from this is that if Google is excited to roll-out the entire metro area, AND Overland Park, KS is enthusiastic about having Google Fiber provide its service to residents – then it is probably a matter of time (who knows what paperwork and red-tape gymnastics would be involved in getting something like this together).

Sean Reilly said he would welcome me sharing his contact information in my newsletter for residents that want to weigh in on Google Fiber coming to Overland Park, KS. So, to reach Sean Reilly – contact him by email at Sean.Reilly@opkansas.org or call his line at 913-895-6109.

If you are also excited to see Google Fiber be a part of your AS-YET-UNANNOUNCED city – PLEASE take a moment today and let your city officials know. If you live in one of the following communities – please take a moment and weigh in with a call, an email or both: