Picking the winners and losers of week 11 in the NFL. 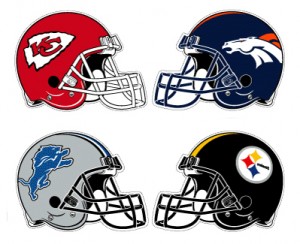 HUGE week in the NFL! The Chiefs finally square off against the Denver Mannings. The Eagles get a chance to show what they know, and many other noteworthy games.

On to the notes.

Indianapolis Colts (-1) at Tennessee Titans
Straight off you have a Titans team that got beat by the lowly Jaguars in week 10. Think it might have been a tough and emotional week for these guys? On the flipside, the Colts aren’t the same with Reggie Wayne. T-Rich isn’t explosive for the offense. A suddenly hot Rams team exposed the Colts as inconsistent at best last week in a 38-8 drubbing, In Indy! Look for the home team to exercise some demons this week.
Titans 30, Colts 20

New York Jets at Buffalo Bills (-1.5)
The coin flip of the week. A case can be made for the Jets to win this one, but I don’t trust them. Too many recent snafus, headaches, heartaches, erratic decisions and butt fumbles for me to pick the Jets this week. The Bills team is on the rise, Manuel’s back and they are playing in Buffalo.
Bills 16, Jets 10

Baltimore Ravens at Chicago Bears (PK)
Ravens are too erratic on the road. I’ll take Trestman’s Bears at Soldier Field in a November game.
Bears 28, Ravens 21

Cleveland Browns at Cincinnati Bengals (-6)
Bounce-back week for Cincy in the battle of Ohio. Cleveland is nasty on D and pulls its wins out this year like a magic trick, but Cincy is nasty on D, explosive on O and playing at home.
Bengals 34, Browns 23

Atlanta Falcons (-1) at Tampa Bay Buccaneers
The Bucs finally put a scratch in the ‘W’ column last week against the Miami Black Eyes. It was only a matter of time (see their game in Seattle two weeks ago). Glennon, Revis, Schiano and the rest of the Buccaneers will get it together this week at home against a Falcons team that has gone adrift.
Buccaneers 34, Falcons 30

Oakland Raiders at Houston Texans (-7.5)
Welcome Back, Kubiak. Case Keenum, J.J. Watt and the boys have missed you. I sense a very close one over a tough-minded Raiders team. RIP Todd Christensen.
Texans 34, Raiders 31 (OT)

San Diego Chargers at Miami Dolphins (-3)
I know that west coast teams often have trouble flying back east for a game, but this Dolphins team is in turmoil and minus the left side of their offensive line. I expect a huge game from Philip Rivers. Gimme the Charge on the road.
Chargers 38, Dolphins 21

Washington Redskins at Philadelphia Eagles (PK)
Has Chip Kelly re-adjusted to the adjustments made by the NFL? This game we figure out what Chip Kelly has figured out. Gimme the home team in a moment of truth.
Philadelphia 42, Redskins 21

Detroit Lions at Pittsburgh Steelers (-3.5)
The Lions are roaring. Matt Stafford grew up against Dallas, and showed that in the victory last week at Chicago. Pittsburgh is tough at home, but are a shadow of their contender teams. I wonder what amazing thing Megatron will do this week?
Lions 35, Steelers 24

Kansas City Chiefs at Denver Broncos (-7.5)
I agonized over this one for two weeks. It finally comes down to what I believe. I know this Chiefs team has been through the hottest of fires last year. The strongest steel of a team has been forged in Kansas City. It is passion, belief, mojo. It is winning nine weeks in a row. It is belief. I believe the Chiefs have some of the most amazing win-ugly luck ever simply because of the fact that they make their own luck through belief, preparation and effort. There is no fear. They already saw the worst that could happen last year. Manning is beat up, less mobile and is already hearing footsteps. Keep telling the Kansas City Chiefs that they can’t. They know better.
Chiefs 31, Broncos 28

Minnesota Vikings at Seattle Seahawks (-6)
My upset of the week. The Seahawks are beatable at home (see the game versus the Bucs two weeks ago). The Vikings are looking to come to town and punch somebody in the mouth. Somewhere between a Jared Allen stamp and an Adrian Peterson cleat mark a Vikings victory will appear.
Vikings 27, Seattle 20

San Francisco 49ers at New Orleans Saints (PK)
I like the 49ers team a lot. After a tough week 10 loss, they are playing for their playoff lives. I really have a hard time picking against the Saints in their ‘dome – but if the Jets can do it, the 49ers can do it better. Break out the paper bags.
49ers 38, Saints 34

New England Patriots (-3) at Carolina Panthers
The bright lights on Monday Night Football finally have something to highlight. This Panthers team is H-O-T. Solid defense, solid personnel, freak-of-nature QB and confidence. Bill Belichick and Tom Brady have their hands full. I’ll take the Championship Quarterback on the Big Stage of MNF.
Patriots 27, Panthers 21